Transcript: How Does a Good Market Strategy Help to Create a Good Company?

Hello, everyone. I’m Edmund Bradford and I’m delighted to have with me today Professor Malcolm McDonald. We’re going to be talking about marketing, shareholder value and how that connects to being a good company.

And in this video, we’re going to be looking specifically at that link to being a good company.

So Professor Malcolm Mcdonald, thank you again for joining us.

How do you think a good market strategy can contribute to a company being a good or a better company in the future?

Well, Ed, I think of all the questions you’ve asked me over the past few years, that’s probably one of the easiest to answer and there is quite a lot of research to back up what I’m saying. Let me give you an example. I had a Professorial colleague at Cranfield called, Professor Hugh Davidson, probably quite well known to anybody who’s listening to this.

He did some research over a number of years and he wrote this book called The Committed Enterprise.  I forget how many respondents there were but I think it was something like 30 major companies that over many, many years had been successful.

And it was interesting that every single one of those organizations had been good citizens and properly embraced what we call CSR (corporate social responsibility).

A tale of two companies

If you bring yourself up-to-date and look at a company like Unilever, I was privileged to be sitting in an audience recently when we were interviewing Paul Polman who was the  group Chief Executive of Unilever. I can tell you that, and it isn’t just window dressing, every single thing that Unilever do: its ethical behavior permeates everything they do.

If I may, I’ll just read out a quote from Paul Polman. He said, “If you want to make the company grow longer-term, you have to get out of the rat race of quarterly reports and quarterly behavior. Many companies manipulate their behaviors and their spending to avoid missing expectations.”

And I mean, this is true. This is what he did and it’s quite interesting. Over ten years, the share value as tripled of Unilever. All of that hand-in-hand with CSR and good behavior. So a real exemplar.

You compare that with somebody like Enron. There may be people listening to this who can’t remember Enron. But Enron was focused on budgets and the short term, and people used to cheat and lie. And they got to the point where they even broke the law. And you know what happened to that organization.

The problem with cost-cutting

Now, just a quick aside here and that is that cost-cutting is not a strategy. I know, Ed, you’ve heard me talk about it before. I call it “anorexia industrialosa” or an excessive desire to be leaner and fitter leading to emaciation and eventually death. And I say, well, how many pence are there in a pound? How many cents are in a Euro? How many cents are there in the dollar? It’s finite. There are only so many of those you can cut.

I’m not suggesting you shouldn’t be cost-effective. What I’m suggesting is that you need to go back to the fundamentals of understanding your markets, understanding the needs of people in those markets and making an offer to them that makes people want to buy from you rather than from somebody who’s got something similar.

The goal: to create value

So to summarize this and to me, it’s easy to say this is very difficult to achieve the way Unilever has done it. But to me, what we should be doing is trying to build great relationships with markets and customers. If you can create value for customers, that’s great for those in the company who create that value. It’s great for all stakeholders and it’s great for the planet.

And that’s really where, I say, it’s not easy to do. But there are organizations around like Unilever, one of the biggest companies globally, that live and breathe good corporate behavior and the results are showing financially.

So that’s possibly not a direct answer to your question Ed, but they’re just my thoughts off the top of my head.

No, you have answered it, and they’re excellent thoughts. And we’ve talked about Unilever before on these videos, and they’re a really good company to think about.

One interesting aspect of Unilever is how, when they were looking at having better labor conditions with their tea plantations.

They realized that actually there was going to be a problem if you pay your suppliers more money, of course, the danger is that you’re going to have to put the prices up, and therefore lose market share.

But they did their market research and realized that there was some price inelasticity there, and they could actually put prices up if they targeted tea in the right segment.

And I think for me, there’s a moral there that marketers and market strategy have a big role to play in companies becoming more sustainable because you can point your products, your brands, your whole company, towards those customers that are interested, that have those sort of needs.

And as you said in the earlier videos, Malcolm, try to steer away from the ones that may say they’re interested, but not when they get to the checkout and trying position yourselves better amongst the growing mass of consumers.

Let’s not forget B2B, Malcolm, the key accounts. So some people watching this may be serving Unilever. Those accounts themselves are generally interested in having a good supply chain.

Unilever has today launched a new initiative to encourage its suppliers to commit to reducing their greenhouse gas (GHG) emissions, in a bid to accelerate efforts to deliver on the consumer goods company’s target to achieve net-zero emissions across its value chain by 2039.

So marketing has got a good role to play in market segmentation, positioning, as well as helping the KAM community.

Is that right, Malcolm?

Excellent. Okay, that’s great. Well, hopefully, that’s been helpful to everybody. I feel we are scratching the surface, but very, very useful.

In the final video, we’re going to get onto the subject of branding and get Malcolm’s views on what he thinks makes a really good brand.

So again, thank you, Malcolm. I look forward to catching up with you soon. 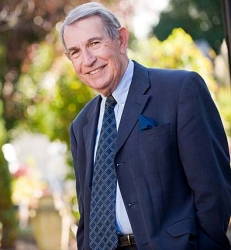 Malcolm Mcdonald
Professor Malcolm McDonald is one of the world’s top educators in sales and marketing. He has written over 50 books on the subject and hundreds of articles. He is a frequent speaker at international conferences and has worked with the senior leadership team of many global organizations to help them grow more effectively. He is an Emeritus Professor at Cranfield University and a Visiting Professor at Henley, Warwick, Aston and Bradford Business Schools.

The best original and curated insights to help your organization achieve good sustainable growth, delivered weekly to your inbox.